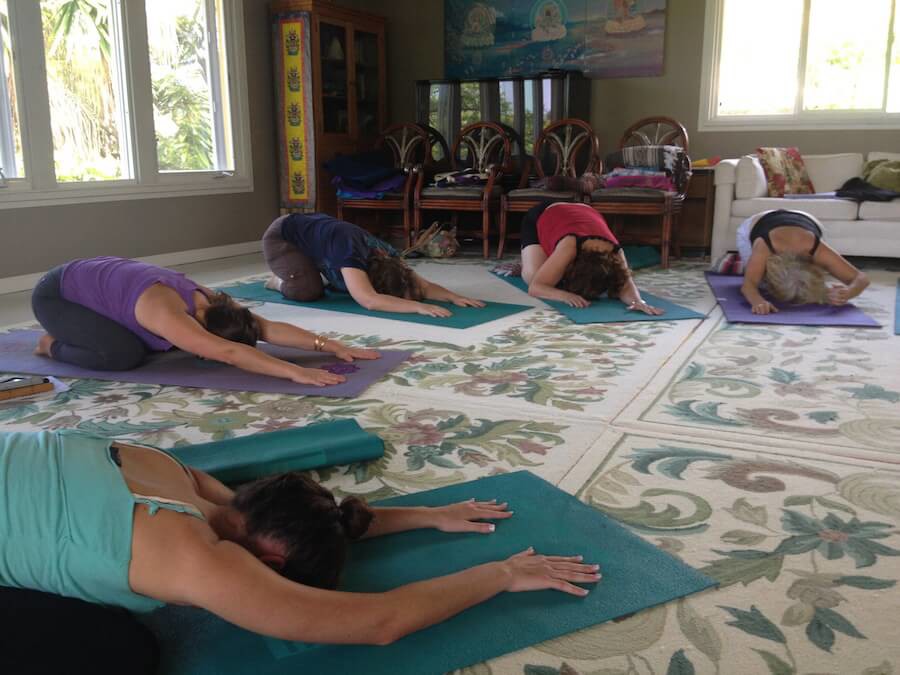 Yoga can be a very effective treatment for PTSD in the victims of trauma. Although it can be difficult initially, especially for victims of sexual abuse, the peaceful focus on control of the body and being present can make a big difference.

When Sara talks about the benefits of practicing yoga, the 56-year-old from Boston uses the same terms as other yogis: being grounded and present, gaining an awareness of her body and its strength, feeling calm and in control of her thoughts. But as a victim of physical and sexual abuse who suffers from post-traumatic stress disorder (PTSD), Sara experiences these things a little differently.

For Sara—who asked that her real name not be used—being grounded literally means feeling her feet on the floor; being present means knowing where she is and what’s going on around her. These are things she can’t feel when she’s suddenly jerked into the past, reliving episodes of her ex-husband’s violence, like the night he chased her through the house and pushed through every door she hid behind.

“It can be very difficult to stay in your own body when you’re getting flashbacks,” she says. “The lighting changes, and you feel like you’re not even in the room.” Sara’s flashbacks come with little warning and can be triggered by anything that reminds her of the abuse.

This painful reliving of events is a common symptom of PTSD, a chronic anxiety disorder that can develop after someone is involved in a traumatic event, whether it’s a sexual or physical assault, a war, a natural disaster, or even a car accident. Existing treatments—which include group and individual therapy and drugs such as Prozac—work only for some patients.

Yoga PTSD treatment can make a big difference, recent research suggests. In a study published last year in the Annals of the New York Academy of Sciences, a prominent PTSD expert found that a group of female patients who completed eight hatha yoga classes showed significantly more improvement in symptoms—including the frequency of intrusive thoughts and the severity of jangled nerves—than a similar group that had eight sessions of group therapy. The study also reported that yoga can improve heart-rate variability, a key indicator of a person’s ability to calm herself.

“This is a really promising area that we need to examine,” says Rachel Yehuda, a professor of psychiatry at the Mount Sinai School of Medicine and the PTSD program director at the James J. Peters Veterans Affairs Medical Center in the Bronx. Soldiers returning from Iraq have high rates of PTSD and other mental health problems; one study reported the total at one in five. Veterans from other wars continue to suffer from PTSD—at times worsened by news from Iraq that reminds them of their own experiences.

The study’s most striking findings were patients’ own descriptions of how their lives changed, says the author, Bessel van der Kolk, a professor of psychiatry at the Boston University School of Medicine and medical director of the Trauma Center, a clinic and training facility in Brookline, Massachusetts. Van der Kolk, who has studied trauma since the 1970s, is considered a pioneer in the field.

“I’ve realized that I’m a very strong person,” says Sara, who continues to practice yoga. She says the slow but steady progress she’s made helps her face her ex-husband in court each time he violates a restraining order. By filing charges for every offense, she hopes to send the message that he can no longer be part of her life. “[Yoga] reminds me that if I just keep plodding along, I can get there,” she says. “I can face it in little chunks and say, “I can work with this piece.’”

Van der Kolk first became interested in yoga several years ago, after he concluded that therapists treating psychological trauma need to work with the body as well as the mind. “The memory of the trauma is imprinted on the human organism,” he says. “I don’t think you can overcome it unless you learn to have a friendly relationship with your body.”

To learn more about yoga, van der Kolk decided to try it himself. He chose hatha yoga because the style is widely available, got hooked on it, and became convinced it could help his patients. “The big question became: How can you help people confront their internal sensations?” he says. “Yoga is one way you can do that.”

Van der Kolk found yoga a safe and gentle means of becoming reacquainted with the body. “Yoga reestablishes the sense of time,” he says. “You notice how things change and flow inside your body.” Learning relaxation and breathing techniques helps PTSD patients calm themselves down when they sense that a flashback or panic attack is coming. And yoga’s emphasis on self-acceptance is important for victims of sexual assault, many of whom hate their bodies.

Some trauma survivors initially find yoga PTSD treatment threatening. “The yoga study had the highest dropout rate of any study I’ve ever done,” van der Kolk says. “It was more scary for many traumatized women to discover their bodies than to take a pill.”

The first time Emerson led a group of women from the Trauma Center into Happy Baby Pose, asking them to lie on their backs, bend their knees with shins perpendicular to the floor, and hold their feet, two of the women left. One never came back. Anne, a 50-year-old participant who endured sexual abuse starting in early childhood, can’t fathom why the pose is called Happy Baby. When she first tried it, her legs shook uncontrollably. “To me,” says Anne, “that’s a baby waiting to be hurt.” She prefers Balasana (Child’s Pose), which makes her feel sheltered and safe.

Such powerful responses to Happy Baby led van der Kolk and Emerson to question whether the pose was worth attempting. They decided to continue teaching it very gently, encouraging students not to try it if it made them uncomfortable. “The goal became making them feel safe in Happy Baby Pose,” says van der Kolk. “The women who stuck with it had extraordinary changes.”

For Anne, who was recently able to go calmly into the pose, yoga’s effect has been profound. “There is no way to describe what it has done for me,” she says. More than 20 years of therapy had helped her continue to function in daily life and end self-destructive behaviors. “But I didn’t think I would find peace of mind,” she says, “and now I think I will.”

Despite its association with combat veterans, posttraumatic stress disorder (PTSD) is actually more common in women than men. In the United States, 10 percent of women and 5 percent of men have the disorder at some point in their lives, according to the National Center for PTSD.

Psychiatrists, psychologists, and clinical social workers can diagnose and treat the condition. To find a mental health professional, ask your doctor for recommendations or check the Anxiety Disorders Association of America’s website.

It’s too soon to say whether yoga PTSD treatment should replace traditional therapy, says trauma expert Bessel van der Kolk, a professor of psychiatry at Boston University School of Medicine. But he recommends it as a complementary practice. “Unless you befriend your body,” he says, “you cannot become well.”

Try different types of yoga until you find one that suits you, and tell instructors before class if you’re uncomfortable being touched. Don’t feel that you need to explain your trauma history. “Yoga is not about talking about your trauma,” says van der Kolk.

“It’s about you and your relationship to your own body.”

Get Updates via Email